The Host Committee is pleased to welcome you to Washington, and as the corporate archivist for Marriott International, I’m glad that the host hotel has long been a part of my company’s portfolio.

The Wardman Park Hotel hosted SAA four years ago, but its history goes back 100 years.  In fact, in 1917 construction on a new hotel began by local DC developer Harry Wardman. It was originally dubbed “Wardman’s Folly” because of its location on the outskirts of downtown Washington and its large size.  The Wardman Park Inn originally was an eight-story, U-shaped, red brick structure modeled after The Homestead Resort in Virginia.

The hotel officially opened on November 23, 1918, shortly after the conclusion of World War I.  It cost $5,000,000, a huge sum at the time.  It was the largest in the city with 1200 rooms and 625 baths.  Because of the housing shortage in Washington, D.C. due to the war, the hotel was occupied immediately.  Approximately 1/6 of the hotel was for hotel guests and the remainder was for permanent apartment residents. 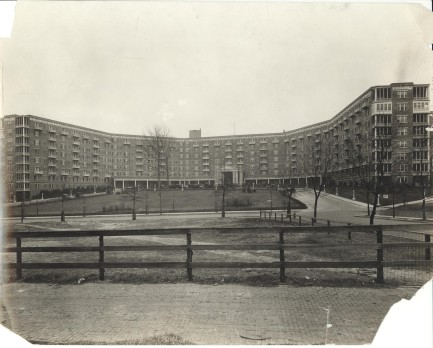 A decade later, the hotel expanded with a new eight-story, 350-room luxury apartment annex called the East Building.  Built by Wardman and designed by architect Mihran Mesrobian, it had rental apartments that were converted to hotel rooms beginning in 1973.  It is currently the only remaining portion of the original Wardman Park and has housed many famous residents, especially those involved with politics, government, and the military.

Unfortunately, in 1929, just a year after that initial expansion, financial difficulties forced Wardman to transfer management of the hotel and annex to United Realties, Inc.  Of course, this was not unusual since the stock market crash in October 1929 caused many people and businesses financial hardship.  The following year, Wardman had to sell his properties as the economy worsened. By 1931, the Wardman hotel was sold at auction to Washington Properties, Inc.

However, as the economy improved, particularly when the U.S. entered World War II at the end of 1941, the hotel did much better, especially with the influx of people to the nation’s capital for war work.

After the war, in 1947, a television broadcast studio, NBC-affiliated WNBW, and the transmitting tower were completed and broadcasts began from the hotel.  The first episode of “Meet the Press” was aired from there the same year and was hosted by Tower resident Lawrence Spivak.

A couple years later, a grand ballroom, Sheraton Hall, and an exhibit hall opened providing the area with its first major convention facility.  And in 1956, the hotel began operating a miniature locomotive to give tours around the 16 acres.

With its success, a multi-million-dollar expansion began in 1963. In the 1970s, the property undertook various remodeling projects.  By 1973, the East Building annex was officially renamed Wardman Tower when the apartments were converted into 311 hotel rooms.

The more contemporary hotel started its ascent in 1977 when construction began on a new modern building on the adjacent property.  This necessitated the NBC transmitting tower be removed; it was donated to the Metropolitan Police Department.  In 1979, the original 1918 structure was razed since it was deemed outdated and unable to be modernized.  The Sheraton-Park was renamed the Sheraton Washington Hotel and Convention Center, the “largest all-in-one convention hotel in the USA.”

In 1983 the property was nominated for the National Register of Historic Places and was added the following year.  Among the numerous high-profile people that have stayed at the hotel through the decades include Vice President Lyndon Johnson, President Dwight Eisenhower, Senator Barry Goldwater, Actress Marlene Dietrich, and Chief Justice Earl Warren.

As is common in the lodging business property management has changed.  In 1998, Marriott International took over running the renamed Marriott Wardman Park Hotel.

Although primarily a hotel, in 2015, the owners, JGB Cos., renovated floors 3-8 of the Wardman Tower as luxury condominiums, harking back to the earlier days when Wardman Park housed long-term residents.

The historic Marriott Wardman Park will be glad to have archivists staying once again this summer.

The Host Committee is looking forward to welcoming you to Washington, D.C. for the 2018 Annual Meeting of the Council of State Archivists (CoSA), National Association of Government Archives and Records Administrators (NAGARA), and the Society of American Archivists (SAA)! We have a robust program and schedule of events planned for you, but we also hope you will take advantage of exploring Washington, DC while you are at the conference. We’ll have more here in the coming weeks about the neighborhoods, heritage, history and sights to see in the nation’s capital. To start off, we wanted to remind you of your transportion options when coming to Washington. Whether by land or air, you have a number of choices. If you come by water … you’re on your own (but let us know how you did it!)

This year’s annual conference will again be at the Washington Marriott Wardman Park Hotel, located at 2660 Woodley Road NW, Washington, D.C. 20008. The Woodley Park Metro stop, less than 500 feet from the Marriott Wardman, is on the Red line.

Washington, DC is served by one national and two international airports:

Ronald Reagan Washington National Airport (DCA)  – Just a few miles south of downtown, this airport is the closest to Washington and is probably the most convenient of the area airports for visitors. Getting to the conference hotel is easy via the airport’s Metrorail station. If your flight makes its approach from the north, you may be treated to “The River Visual” as your plane follows the Potomac River, giving spectacular views of monuments, bridges, and iconic buildings before landing.

Washington Dulles International Airport (IAD) – Dulles lies about 25 miles from Washington, DC. While not the closest to the city, it can be a more direct flight from some locations. There is no Metrorail station in the airport, but the Silver Line Express Bus from the airport takes you directly to the Wiehle-Reston East Metrorail Station. If you prefer, there is also taxi service via the Washington Flyer Taxi Service to and from Washington.

Baltimore Washington International Thurgood Marshall Airport (BWI) – Whether by train, bus, or automobile, it will take about 45 minutes to an hour to get from BWI to the Washington area. Like Dulles, BWI is not as close to Washington, but  it can be a more direct flight from some locations. Once you have arrived at BWI, you do have a number of options to get into Washington:

In addition to major bus lines such as Greyhound and Peter Pan, several smaller bus services arrive at and depart from the bus terminal at Union Station. The bus terminal is one level above the top level for the train station. Once at Union Station, you can easily board Metrorail and make your way to the conference hotel.

Greyhound – The largest bus service in North America, Greyhound has the broadest network of routes to Washington. Prices vary depending on where you are coming from and how far in advance you buy your tickets.

Megabus – You can take Megabus to Washington from a number of departure points along the east coast of the United States, as well as from Toronto, Ontario. Depending on how far in advance you buy tickets (and your departure and arrival points), you can get a very good deal. The bus stops for Megabus are located at Union Station.

BestBus – Another option between New York City and Washington, with stops in Delaware and Maryland, is BestBus (formerly DC2NY). BestBus drops passengers off and picks them up on the corner of 20th St. and Massachusetts Ave. NW in Dupont Circle. From there you can take the Metro to the conference hotel from the nearby Dupont Circle stop, or you can walk the 1.2 miles to the conference hotel by going northwest on Connecticut Avenue until you reach the Marriott Wardman Park.

There are three major railway services that serve Washington, D.C. all of which terminate at – you guessed it – Union Station.

Amtrak – Amtrak runs regular service along its Northeast corridor route, from Boston to  Washington on the Northeast Regional, or on the faster (and more expensive) Acela Express, and further south along the Atlantic coast on the Silver Service. Taking Amtrak from other regions can take much longer and involve making multiple connections and train changes along the way. Amtrak trains are also equipped with WiFi, food carts, bathrooms, and luggage storage. Much like airline tickets, Amtrak prices change based on the time of travel and how far out you book travel.

MARC – The Maryland Rail Commuter Service, serves Maryland, West Virginia, and D.C. Tickets are relatively inexpensive.  Service run frequently during rush hours, and slows down in off-hours. All MARC lines including Penn, Camden, and Brunswick terminate at Union Station in Washington.  All three lines run Monday-Friday, but only the Penn Line runs (on a limited timetable) on the weekend.

VRE – The Virginia Railway Express serves Northern Virginia and D.C. Tickets are moderately priced. Service is only Monday-Friday, and  runs frequently in the morning, but drops off considerably in the evening. Unless you are traveling from select towns in Northern Virginia, this is not the best option.

From NORTH (Boston, New York, Philadelphia, Baltimore): Once you get into the D.C. metro area, stay on 95 S to Exit 27: 495 W toward Silver Spring. Next, take Exit 33: MD/185 Connecticut Ave. toward Kensington/Chevy Chase. From here, head to Woodley Road NW. The hotel will be located on the left.

From SOUTH (Richmond, Raleigh, Atlanta): Once you get into the D.C. metro area, stay on 95 N. Continue on 395 N/Henry G. Shirley Memorial Highway. Take Exit 8B: Virginia 27/Washington Blvd. toward Rosslyn. Continue on S. Washington Blvd. Take the Arlington Memorial Bridge, 23rd Street NW, 22nd Street NW, and Connecticut Ave. NW to Woodley Road NW. The hotel will be located on the left. 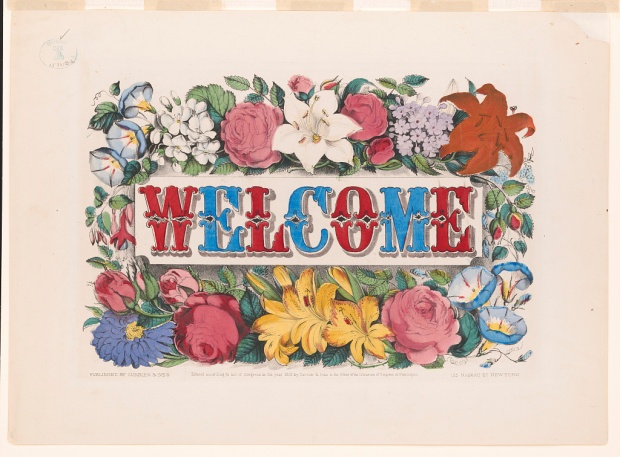 Hello and welcome to our blog! I am Danna Bell, one of the co-chairs of this year’s Host Committee. My co-chair Casey Coleman and the rest of our committee are looking forward to welcoming you to Washington, D.C. for our joint annual meeting.

Many of you have been to Washington, D.C. in the past for conferences or other activities and may think you know the nation’s capital. We hope with this blog to share new places to visit and also give you some fresh ideas about some familiar locations. We’ll remind you of basic information including how to effectively navigate Metro, let you know about other transportation options, and where to find cheap and quick food. We’ll tell you where to find places with good music, great independent bookstores and nearby supermarkets and drugstores.

In addition you’ll learn what’s happening at the embassies during the conference, get information on some of the lesser known museums in D.C. and learn about the murals found throughout the city. And if you want we’ll let you know where you can get crafty, find local brews or get a tattoo to commemorate your trip.

The blog will also be your place to find out about tours and open houses, service projects and other events taking place during the conference. We hope you’ll come back and visit often. I think you’ll find lots of fun and useful information.

So welcome to the blog and see you in a little less than five months.

Rosalye Settles
Office of the Comptroller of the Currency